In pumping heat, about six hours into my motorbike safari, I stop next to a tired looking Corolla, bonnet up, its grey haired owner staring at the engine with a weary face. He comes on the inland route, all the way from Townsville to Harvey Bay for Xmas with the grandkids he tells me. Quite a big drive for one day given the distance, heat and speed limit I remarked, calculating it as about one thousand four hundred kilometres. After a brief discussion about the fan belt, leaky radiator and a flat mobile phone battery he waves me off, too proud to accept any help but a brief yarn. Not that I, with only the bike and four litres of water, had much more to offer. As I pulled away, promising to send help from Rolleston he stared at my departure with a flash of desperation on his face.

Entry into Rolleston, clouds packing in the dry sky

I rode into Rolleston, a mere smatter of a place, only to learn its last general dealer “a bit of this & that and drapery” had its closing down sale in June 2012. The Choice Filling Station includes a SPAR convenience store that sells almost everything, including fake reindeer horns, a variety of frozen foods, ice creams, freshly ground coffee from a machine, and take away foods but no Corolla fan belts. I was overcome with despair for the old guy next to the road, he reminded me so much of my father, proud but drained by a lifetime of hardship.

‘A Bit of This & That’, sadly now closed

The shoppers and staff, all jovial with Christmas fever, barter and chat, making jokes and eating copious amounts of ice cream inside the shop, it is freezing cold with a big air-conditioning system keeping everyone happy, and their wallets open. A short fat and loud version of Father Christmas with a real white beard, shouting “ho-ho-ho” after every sentence, is quiet for a few seconds as a young beautiful, well endowed and scantily dressed Spanish tourist gets out of a camper van and walks into the shop. The Father Christmas man whispers says “holy fuckin’ moly” under his breath, also witnessing the size of the tourist’s boyfriend who then just walked in as well, shirtless and muscular. After a few moments of quiet admiration, happy noise and talk return, Father Christmas tells me not to worry, the old guy will be towed into town by one of the many farmers, surveyors or mining people in the region. Someone will surely help.

About eighty or so kilometres south of Rolleston lays the Carnarvon Gorge National Park, a series of impressive sandstone canyons and gorges. Overnight rain and cloud cover in that region makes for wonderful motorcycling weather, Not chasing anything, I turned off the A7 Carnarvon Highway onto a narrow and curvy bitumen road, towards the Gorge, delighted in me spotting mobs of emus and wallabies in the fields. (Yes, that is what you call a group of emus! A mob! Not a flock, or a swarm, or even a pack of emus, no a mob. So also for kangaroos and wallabies, although kangaroos may be called a troop). Thank you Brett Bacon, a bit of free education on my safari. I was less delighted by the Brahman cattle, who would wait until you are right next to it, then to dash across the road, just like in Africa. Different passports did not give them any more road sense.

Warning of rains to come? They must have missed the Mayan end of the world… 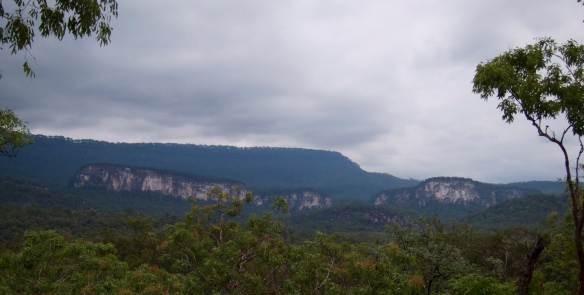 The rain and the mist does not help to take a good photograph, but this is the entrance towards the National Park.

The last fifteen or so kilometres is a wet and slippery mud and gravel road, making me nervous but I remember the rule of gravel/dust/mud and sandy roads “look up, open up”. It works, also available in theory. The sheer beauty of the place made me stop in bewilderment, taking many photographs from the iPhone with soft rain cooling me down and making the road even more fun. I booked, for a wild $15, a campsite in Takarakka Bush Resort, a quiet, and beautiful place. It is truly a splendid place, tranquil and serene, luscious with plant and animals, the ideal place for a snooze, a rest, some walks, camping/safari style dinner and squaring up with fellow travellers. The manager tells me peak season, April to October brings six hundred people per weekend. I feel lucky, only about ten families. 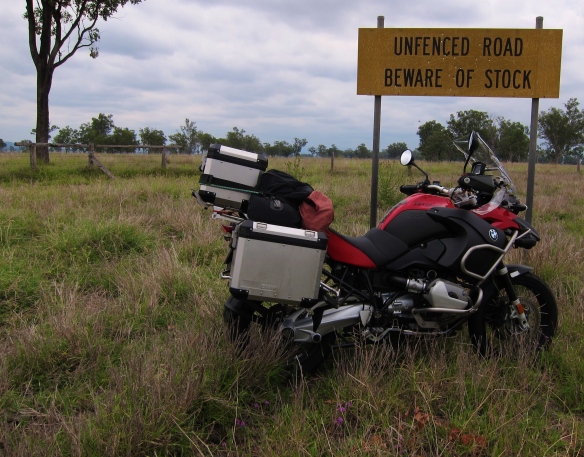 In this case “stock” means animals, not shares or the watery stuff you put in a soup.

I always knew! Father Christmas is a biker! Entrance to a farm on the way to Carnarvon Gorge

The little shop is well stocked with basic tourist and camping items, with a better,  more luxurious variety than the Choice / SPAR in Rolleston. People come and go through the shop cum office; the visitors and staff are happy and chatty, a bit like the office in Yeppoon, sharing their day’s experiences. Thinking of the sadness for dinner in my tin of tuna, four well-squeezed peaches and a mug rooibos tea, I give in to my inner evil twin and buy a nice thick Brahman steak, a bottle of Shiraz and a smile. Tonight is party time! Time to meet the Joneses!

My 22 year old Sunseeker Isodome tent! Went around the world with me, and a few others… What a fantastic campsite.

I was the first to set up in the communal kitchen, sparse but functional and clean. Pouring a medicinal glass of Shiraz in my well-travelled stainless steel goblet felt nearly so exciting as kissing that first girl behind the tuck shop in high school. I wonder how she feels about red wine?  The Joneses did arrive, firstly in a Swiss couple from Emmental,  with their typical Swiss precession, their multi-purpose tools, and politeness, telling me about their time in the Kruger National Park. Then a flamboyant old Latvian Australian, with his shirt unbuttoned, sporting a few silver and gold chains and a huge belly. He is a bit like a fairy godfather, showing tourists around for the fun of it. His guests were a slightly bewildered American couple, half his age, dragging bags of beautiful fresh food along, all to be cooked. We all chatted, sharing cooking oil, lighters for the gas stoves, exchanging stories, and suggestions, typical of such a tourist place with a communal kitchen. A young couple, the bloke sporting a Mohawk style haircut, his very pregnant wife, and two kids joined the kitchen area, but keeping to themselves.

As I enjoyed my second dosage of Dr Shiraz’s medication, the grey old man, owner of the boiling Corolla joins the cooking, dragging in a plastic bag with hastily purchased SPAR food. I greet him, but he ignores me, perhaps he did not recognised me, I looked very different, freshly showered and in normal clothes, he focussing on his loaf of white bread, a tin of tuna, and tin of baked beans. I could sense his unease, the accidental tourist. The Latvian and Americans drank two bottles of Californian wine, braaiing steak and boil mealies, the Swiss eating a stew kind of thing, and me with my family size steak, all having a jolly good time. I offered some wine, no one, probably out of decency of fear of its healing properties, took it up. I walk over to the Corolla man, softly offer him half of my massive family sized steak, which he quietly declines, shaking his head, saying he loves white bread, tinned tuna and beans.

The American girl, from Thailand originally, is studying towards her MBA, so we exchange some ideas and thoughts. Her boyfriend works for Rupert Murdock’s News Corp, FoxTel in LA to be exact, and they discuss the future of the print media with the Swiss, who are engineers in a hi-tech publishing house. The Mohawk guy told us in no uncertain terms what he thinks about capitalism, money and the media, his wife quiet, cutting sausages for the kids.  It was quite an interesting turn of events; the Mohawk guy is clearly intelligent, and could keep his point of view, but nothing too serious. We all agree on recycling, and that we should build energy efficient houses, and grow our own cherrie tomatoes.

Damian Hooper, an intellectual bogan, as he calls himself. Great guy, good conversation! Not so sure about the hair….

As the evening progressed, a mellow happiness settled in. It started to rain again, forcing me to dash of to put my tent’s roof, running into a mob of wallabies in the dark, me nearly screaming out of fright, quickly regaining my composure, as a big white hunter from Africa does. We all wash up, and people retire to their campsites. The Corolla man shuffles his shopping bags, he will sleep in his car he says, and he did not plan to spend the night here, he cannot really afford to spend the night in the campsite. He tells me the car is ok now, the short fat Father Christmas sorted him out after he was towed into Rolleston by a SANTOS Land Cruiser. He said, he think he will reach Harvey Bay now, no worries, and if the offer still stands, can he please have some of the steak for breakfast, white bread only would not last him for the journey.

The road in and out. This is a sandy bit, the rest was slip sliding away on mud…