Setting up and packing for my long distance motorcycle safari on unknown roads and ever changing weather conditions turned out a subtle combination of a challenge and an art.  Fitting two weeks of clothes, camping and cooking gear, biltong and droëwors, camera and computer equipment and myself on the machine needed careful item selection, planning, thinking, packing, and repacking.  Truly ‘practice makes perfect’.

In preparation for the motorcycle safari I’ve spent considerable time in the male personal product aisle to check out and compare the lightweight toiletry options for the travelling man.  As I prefer the smooth clean-shaven look to the rugged war ready Islamic face, the plethora of shavers, shaving gel/foam, shaving brushes, and other vibrating or sharp-edged face scraping tools amaze me, especially the price. The wet-and-dry battery operated models appeal the least, mostly due to the amount of red wine I can buy for the same money. I opted for a five pack Gillette Mac III blades,  ‘King’ shaving gel and a small tube of Factor 50 anti-insect, anti-wrinkles, post-shave sunscreen for the normal male skin type. This, with a packet of 24 Disprin, two tubes of anti-perspirant deodorant roll on and some foot powder completed my cosmetic selection. No bulky vanity case full of tubs, creams and lotions for the motorcyclist on safari.

Camping and cooking gear comprised the usual sleeping bag, self inflating mattress and small tent; a well travelled but never used before lightweight, quick drying all natural bamboo fibres, good for the planet and dolphin friendly body towel; a small, ancient, worldly well used Italian Caffettiera, perfect for the roadside espresso and my army dining set all individually sealed in a “zip-lock” bags made the packed kit.  The laptop, iPad, cameras, tripod, and assorted power cords and back-up disks went into a backpack, which, as per its intended use, had to fit on my back.  The evening before my departure I was quite impressed with myself for fitting everything on the bike and in the backpack.  Sadly, early the next morning, on my departure I discovered the backpack pressed against the tent and sleeping bag sack, making riding the motorcycle impossible as my nose was squeezed to the screen, and my body to the fuel tank.  Hastily repacking everything, leaving behind some items previously considered essential, including rain covers, packing straps and a packet of large size Glad Snap Lock Reseal Bags; I finally headed out of Yeppoon on my safari. 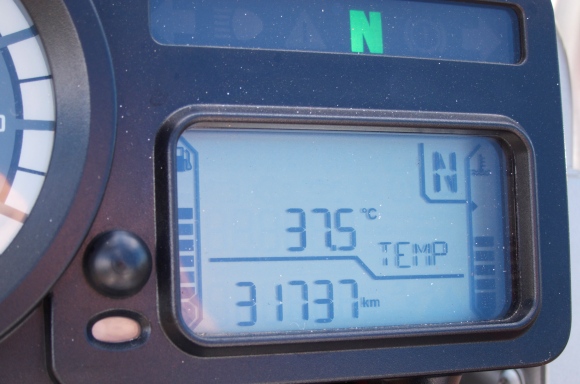 The worst of winter is just over

Riding west from Rockhampton in December would always be in sweltering heat, and it was just cooler than hell.  Some parts in Central Queensland had the mercury pass 37 degrees Celsius, breaking quite a sweat, especially in a riding suit with long johns and long sleeved woollen riding t-shirts under it.  My stop in steaming Roma convinced me that most of the fresh produce I had would be dead by heat in the next day, and that I had to consume everything today, or get some mean mother form of cooling system going in the food part of bike’s panniers, which by itself are strong water/dust and noise proof aluminium boxes.  That day’s journey ended in St George, with huge thunderclouds building in the sky, signalling some heavenly relief from the persistent heat. The camping site in town, although on the banks of the Balonne River had few trees, rock hard and boiling hot red soil to put up a tent, so I took the soft option: A motel room sporting an artic style air-conditioning and a laundromat to wash all the smelly clothes won the day, regardless of my thin budget. Having space in the motel room allowed me to repack all the bags, panniers, and the camera backpack.  Out went the MacBook into the right-hand side pannier, all the chargers, and notepads into the left-hand side pannier and the iPad snugly into the top box pannier.  The only things left in the backpack was the three cameras and lenses, and that is strapped on the rear seat, no longer on my back.

When you grew up on a farm, and many years in a row saw your father’s mealie (corn) crop withering and dying in heat and drought, an approaching thunderstorm is serious cause of celebration.  So the motel owner, his wife and two young waitresses joined me on the verandah to toast to rain, and rain it was.  The region received between four and six inches of rain, the beautiful smell of wet soil swept through the air, and pools of rainwater everywhere.  Riding east towards Goondiwindi had its moments as I had to cross four areas with strong flowing water at least thirty centimetres deep across the road, which is a bit of a different exercise on a motorcycle.  It was huge fun anyhow, and boys being boys, I turned around and did it again, each time at increasing speed until my protecting angel told me to grow up. 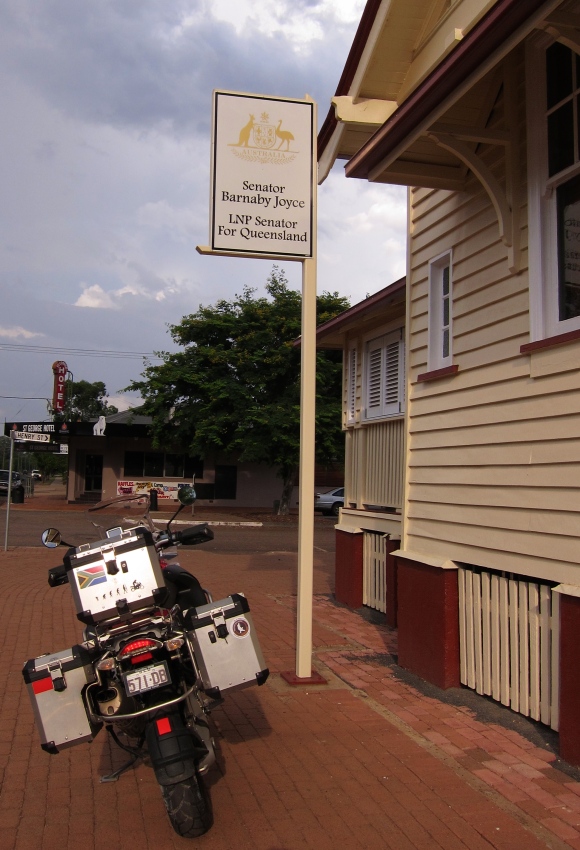 One of my favourite politicians, Senator Barnaby Joyce’s office in St George.

On the banks of the Balonne River, just before the storm

Serious John Deere tractor ready to take on the wet soil. In St George they plant cotton, mealies, wheat and have many cattle and sheep. 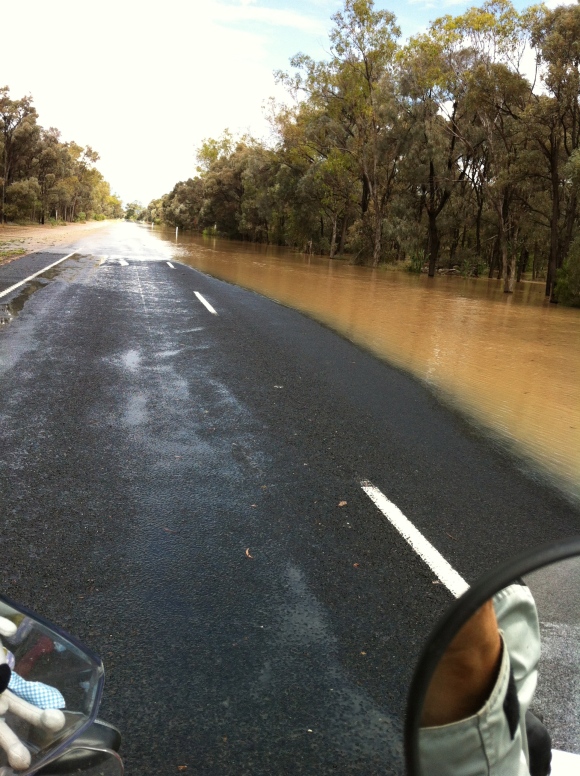 When it rains, water everywhere! Quite an experience on a motorcycle if the water is flowing strongly…

Into Goondiwindi got me pass as sign stating ‘boerewors’ for sale, and all behold, it was Afrikaans people who own the butchery, selling meaty stuff I like. This is where all trouble started.  With Christmas and other festival days in mind, a few kilograms of boere wors, bag of droëwors and some biltong was acquired and stuck into a small coolbag in the top box.  With a small wolf hunger, I looked around for a nice place to buy lunch, settling for a place selling freshly salads and grilled fish in the main street.  The sun beat down on the asphalt, small mirages forming on the shiny aluminium panniers, confusing the eyes. Ice is what I need, to keep the boere wors cool and calm.  So, a fat packet of freshly made ice found its way into the coolbag in the top box, keeping the boere wors cool. 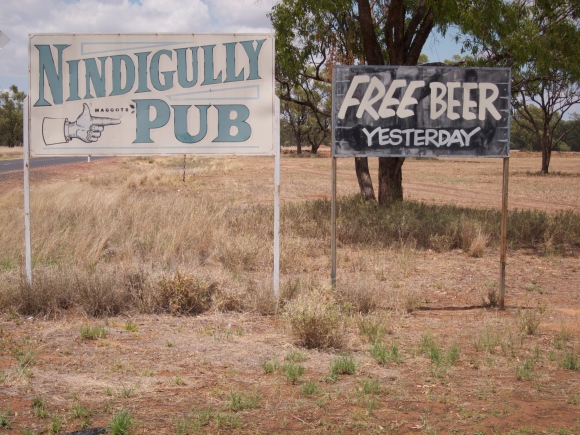 On the banks of the Moonie River, the famous Nindigully Pub where the annual buck and spinster ball takes place, offering free beer, yesterday

This is a serious party spot. The waitress is from Latvia and could have been a beauty queen, the Coke Zero was cold and the entrance road muddy and slippery. 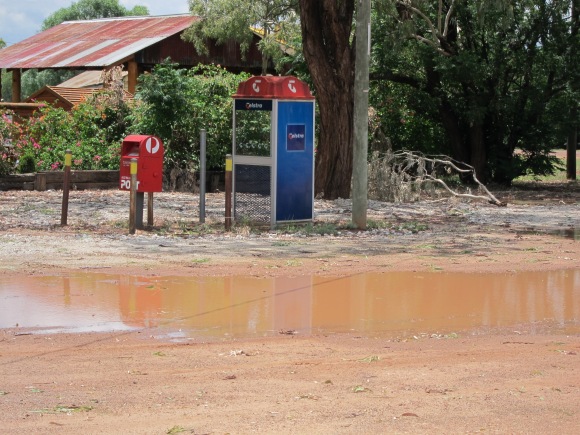 Post and Telstra on an island, but so are we?

The rest of my journey, to reach the beautiful town of Warwick, was wet and wonderful.  It rained for many kilometres, hard thunderstorm rain, pelting down on earth and its inhabitants.  I was soaking wet as I rode into town, the thick clouds removed any doubt on staying in a motel, which at $95 was a dry song. While unpacking, and much to my horror I discovered the cameras in the backpack were soaked in rainwater.  In the room the machines were quickly pulled apart, the batteries on one side, the lenses on another and the cameras, face down on fluffy towels.  I was considering going to the local hotel for a nice pub dinner, meet the locals, making small talk, discovering their life when I spotted the large freezer compartment in the fridge.  An ideal place for the boere wors then!  Streams of water and drops ran of the top box as I opened it up.  The calamity of the cold boere wors struck me.  While the sausages were spared the heat, my iPad was not spared the drowning.  It was floating facedown in ice-cold water in the watertight top box.

This is where all the wetness trouble started….. The boerewors was fantastic however….

I spoke in a variety of coarse languages, kicked the wall, pulled my hair, but the iPad was wet and very dead. I could not believe my stupidity, leaving the iPad in the top box, that it shared with a not so watertight coolbag filled with ice cubes….  As I tried to resuscitate the iPad, shaking the water out, putting it in a plastic bag with moisture absorbing granules, turning the room’s aircon to “dehumidify”, and sticking it in the sun for two days, all to no avail I thought back on what I left behind under my carport in Yeppoon: A packet with of large size Glad Snap Lock Reseal Bags, of a size that would have individually swallowed the iPad and cameras, and kept it beautiful and dry indeed. 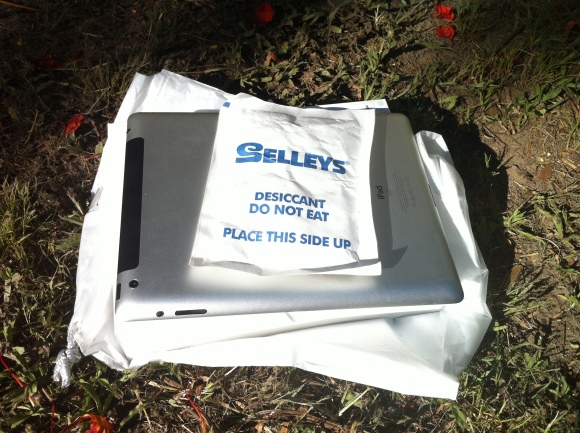 Very wet iPad basking in the sun, with moisture sucking granules to dry it out (All removed from the plastic bag to demonstrate the issue)

As all my maps, planning, and photographs was stored on the iPad, it was a double whammy, gone is the machine, and gone is a lot of work and planning.  Quite glum I walked into Carindale’s Westfield Apple Store, and walked out with my one and only Xmas gift to myself, a new iPad.  The next stop was Coles for a packet of large size Glad Snap Lock Reseal Bags.

Wet and wonderful! Looking back on the safari so far, it is a blast.

2 thoughts on “Wet and Dry in the rainy season”