“Riders on the Storm

Riders on the Storm

Into this house we’re born

Into this world we’re thrown

An actor out on loan 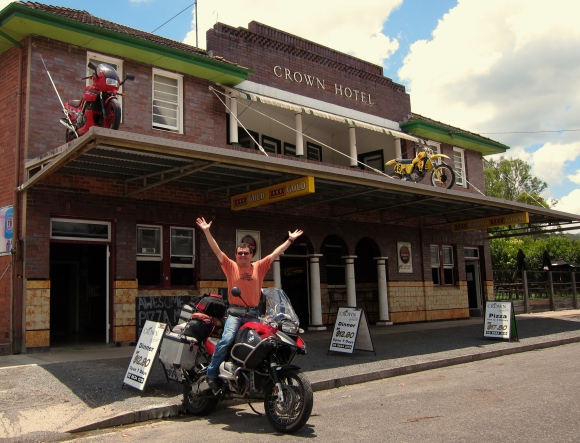 “Riders on the Storm”, in Urbanville, before the rain started

In a few days, since my motorcycle safari departed from Yeppoon, I started this love – hate relationship with my motorcycle GPS.  Apart from being user unfriendly (apparently it was designed in Hungary by a team of mutant dwarfs; the touch screen user interface was written by Russians for the Mongolians, who they hate, and it shows; the machines, its maps and touch screen interface was then adopted for Australian conditions by a Chinese hay farmer), it keeps on putting challenging deviations on my planned routes, like turning from the perfectly correct highway onto a dust road, taking me over a mountain on a goat track, or crossing a crocodile infested river where no bridge exist.  Struggling with the route the GPS proposes and the preferred meticulously planned one, while nursing a soft babalaas* next to the busy Pacific Motorway is a sure way to test my sense of humour. 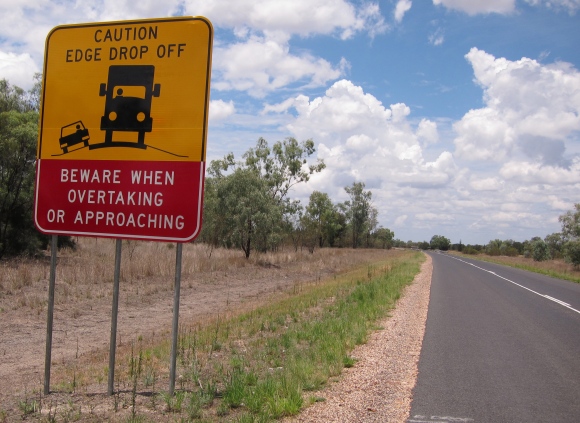 Beware of the GPS prescribed route, it may be to the left of the trees….

In a strange attempt to do soul searching, I planned to retrace the Beaudesert – Woodenbong mountain pass, where I had a slight mishap in a spectacular manner during my motorcycle safari from Yeppoon to Adelaide in April 2010.  This time around, I wanted to ride the mountain pass, and beat the bends.  The GPS had other plans.  After, what felt like circumnavigating the proposed starting point of this route, the town of Beaudesert, three times following back roads and soon to be constructed roads, I just had it.  Trying to make a quick U-turn on a narrow gravel road made the bike slide in the mud, falling over in slow motion effect, the BMW on top of me.  I spoke in a variety of languages, mostly not fit for family time TV.  As I struggled to pick up the heavy bike in the mud I though why the hell am I doing this?  Why am I riding a bloody motorcycle during my Christmas holiday, through harsh remote areas on my own?  Why can’t I, like normal well-adjusted citizens, go to Melbourne to watch the cricket, or if that is not exciting enough, finally paint the outside of the house?

If you need a drink, Fast Eddy’s the man (between Tambourine and Beaudesert)

A farmer, slashing the grass on his road reserve stopped and helped me out.  He was quite surprised to see me there; the road he said was closed a long time ago, and is now only used by the local residents. 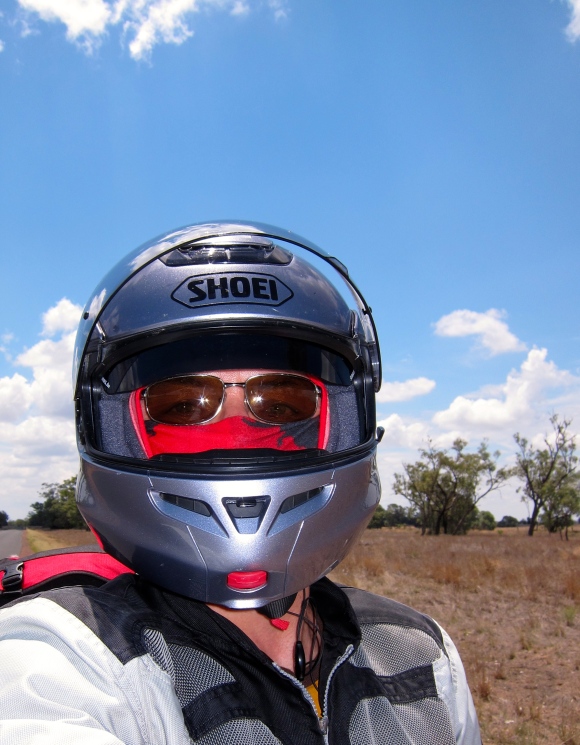 In drier moments, sporting my Che bandana, to catch the sweat, or rainwater before it hits my eyes

Knowing my intended destination, the City of Armidale, is more than a day on a fast horse to the south, and encountering kangaroos on the road at dawn doing 100kilometres per hour is not that entirely romantic, so I called it quits.  I’ll ride that road another day.  Lady Luck was shining on me; as soon as I found the official bitumen road that will take me to the New England Highway, and Armidale, it started to rain; as if Noah had recently completed his Ark, and all the animals, in pairs of two where safely on board.  The temperature dropped from 30degrees Celsius to 17degrees Celsius in a matter of minutes, but the brave one pushed on, brushing off pouring rain, low visibility, and slippery roads.  Too much in a hurry to don my raingear, which is at the bottom of my bags, I told myself “ag man, it will be over in a few minutes”.  Three hours behind schedule, being in rain for the last one-hour, the City of Warwick, also know as the City of Roses, appeared on the horison.

With rhythmically clattering teeth I stopped at the Shell / McDonalds in Warwick, filling the bike, jumping up and down to drain some water from my soaked riding gear.  Enough of cold wetness and miserable miscalculated safari routes I thought, time for a hot coffee and a scone with cream and strawberry jam!  On Boxing Day, the City of Warwick had other things to do; the only place open that may supply such culinary delights was the McCafe. 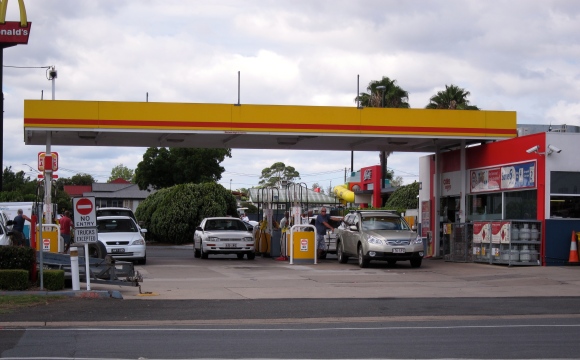 Warwick Shell and McDonalds on background.

I stopped in front of the neighbouring McDonalds, spotting a wet but immaculate Stealth gunmetal grey Harley Davidson V-Rod with matching matt black leather saddle bags, a serious set of pipes, and the biggest rear tyre I have ever seen on a motorcycle.  It is wider than Denmark.  The Harley was both impressive and intimidating, until I saw the owner.  About 30centimetres taller than me, muscular as in a gymnast, long curly blond hair going grey, in tight leathers and the expected tattoos, she is a seriously attractive woman, even for one in her late fifties perhaps early sixties.  She puffed a smoke and, as the first Harley rider to ever return my salutation as a non-Harley rider, she simply said “G’day mate”.

The McDonalds was a beehive of activity.  Teenagers all dressed in pimples and formal suit, sporting similar black and purple colour coding, slurped their milkshakes.  Pretty giggling teenage girls with too short dresses for my heart made me focus on the drinks and pastries menu.  Apart from drowning my helmet under the automatic tap in the men’s hand basin, nothing could spoil my expectation of tastebud delight as much as a McDonalds scone, so I drowned it in peanut butter and strawberry jam.  Escaping the festive mood inside the eatery, I stepped out to the open air sitting area, pouring the last water out of my helmet, and then sat down for the scone.  The Harley lady was seated just beside me.

I was as curious as herded cats, so I started chit-chatting, saying her bike is very nice, asked where did she ride from, did she get caught in the rain, where is she heading etc.  The normal Cecil Barnard both boots in the mouth opening conversation.  She slurped her mango smoothie with sophistication not commonly found in a McDonalds, looked at me in a way that would make James Bond shiver in fear and said, “Why do you ride?”  I was completely thrown by the question, by her soft sexy voice, an English accent, and piercing blue eyes.  I felt a bit like that rabbit in the approaching car’s stream of headlights.  “Uhmm, I guess I like it” I tried.  Attack would be best here, so I asked, “why do you ride?”  She smiled and said, “I ride because I have to”.  Not wanting to sound nosy I replied, “oh, you mean, you do not have a car, so you ride the Harley as a means of transport?”  Clearly a master of the conversational art, she started discussing motorcycles, riding in rain, dickhead motorcar drivers, P-platers who text while driving (I encountered two in just one street block this morning), and asked why I bought a BMW.  We had a splendid conversation; clearly both of us enjoyed it.

Then, in a blink her eyes turned dark.  “My husband bought the Harley, it was his dream Harley. He always wanted a custom built one.  He ordered the purpose made pipes, the Stealth gunmetal grey paint job, the oversized wheels.  He was forever talking about us riding to Melbourne, and riding around Tassie, even New Zealand.  But we never did.  We never had time, always the business, always the responsibilities.  Then one morning while exercising on his pushie, he died.  He died of a heart attack, just like that.  He was super fit, healthy, he died before he could ride the Harley”.  She smiled at me,  “I ride to remember him, and I ride to honour him.  We moved to Toowoomba in 1976, we just arrived from the UK, and liked it in Toowoomba over Brisbane and the Coast.  We never had children, but it was enough to have him, and for him to have me.  When I ride his Harley, he is with me, so everyday I ride, everyday he is alive with me”.

She picked up her helmet, matching colour to the Harley, looked at me with her piercing blue eyes and said, and I try and remember the words the way she said it, “people ride motorcycles for a reason.  You don’t just ride a bike.  You either ride away from something, or you ride to remember something, or you ride in search of something”.  She pulled on the helmet, took her leather bag, turned to me, and said, “You have sad eyes.  Why do you ride mate?”

* balalaas is an Afrikaans word for hangover 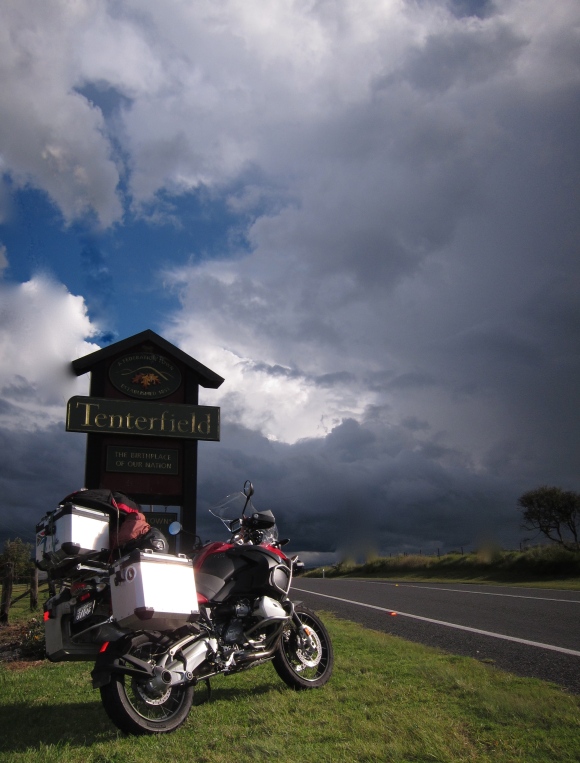 Why do I ride?

6 thoughts on “Riders on the Storm”